Why did I write “A Bright and Blinding Sun?”

Why did I write this book?

It all started 15 years ago when Lt. Buck Compton and I were waiting for a plane during a speaking tour. Buck—who’d been a commissioned officer with the legendary Band of Brothers—was talking to me about World War II, and I remarked about the difficulty he’d experienced during the wintery siege of Bastogne.

Buck agreed then said: “Yeah, but at least I wasn’t fighting in the Pacific. Man, those guys had it really rough.”

That line stayed with me for years.

When historian Adam Makos and I interviewed veterans for our bestselling 2013 oral history project “Voices of the Pacific,” I grasped more fully what Buck was hinting at. But I hoped to do more.

I wanted to write a full book about one veteran who’d fought in the Pacific—so we as readers could enter the depth of his experiences and see history in new and personal ways. As Hemingway articulated, I wanted to “write hard and clear about what hurts,” then lay the wound open to light.

The opportunity came with A BRIGHT AND BLINDING SUN.

It’s an incredible true story about a 14-year-old named Joe Johnson who fibbed about his age and enlisted in the Army just before Pearl Harbor to escape a difficult home life.

Sent to the Philippines, Joe fought on Bataan and Corregidor until General Wainwright’s surrender on May 6, 1942. For the remainder of the war, Joe struggled to survive as a POW of Imperial Japan in some of the harshest conditions known to mankind.

In a twist to his story, he met a teenage girl in Manila, and they became unlikely, smitten friends who helped each other endure.

Ultimately, this book is about heroics, empathy, and healing—all things needed in big supply these days. One huge takeaway for us is increased gratefulness.

Today’s generations need to understand that freedom isn’t free. Past generations have given much, so that we can live for what matters.

I sincerely hope you enjoy this book!

Order your copy of A BRIGHT AND BLINDING SUN from:

Or ask for it at a bookstore near you

The reviews are in …

“Storytelling at its best.”

―Heather Morris, #1 internationally bestselling author of The Tattooist of Auschwitz

“Superb! A rare and moving narrative, both brutal and compassionate in scope.”

“Full of near-death escapes and unlikely twists of fate, this will appeal to fans of Laura Hillenbrand’s Unbroken.”

“Brotherton has done his homework… A good read.” 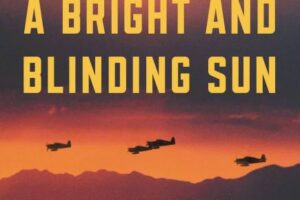